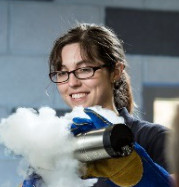 Bond-breaking as a descriptor for nanodosimetry

In order to understand the application of hadrontherapy and nanoparticles to treat tumors on the molecular scale, a molecular description must be accurately modelled. This in turn can be used for appropriate treatment planning.

When an ion beam is incident on cells, there is a huge cascade of secondary electrons which spread along and around the path of the beam, causing damage to biomolecules and eventually irreversible damage to DNA resulting in cell death. The probability of these electrons interacting with molecules in any way is called the cross section, and these cross sections can be measured experimentally or calculated theoretically. These values are then used in track structure and transport models to show where and how damage to the medium occurs. With the addition of nanoparticles this becomes more complex, and a greater understanding of the interaction of electrons with nanoparticles in biological media is necessary.

The goal of this project is to relate the cross sections of interaction with lethal bond breaks with biomolecules and include the action of nanoparticles in simulations and models, to show the reality of cancer treatment. This will be achieved via experimental measurements of cross sections for interaction of electrons and ions with biomolecules in vacuum conditions, theoretical calculations, modelling and experimental validation of models within the hospital Puerta del Hierro (Madrid) in preclinical trials.